The Chinese New Years Event was an event, which lasted 3 days (72 hours) from 8th to 11th of February 2019, and was available for both iOS and Android. The main draw was the introduction of the Turtle Dragons.

For the duration of the event, a new level was available which could be accessed from either the camp or from the level's map. The goal of this new level was to collect enough event points to unlock the 10 prizes offered (which, once achieved, were sent to the camp like other level completion awards). The level could not be reset but required no chalices to begin or resume.

As with other special events, a constant internet connection was required to participate. Loss of connectivity during the event resulted in an inability to continue gameplay and freezing the progress in the level until a connection was re-established.

The event ran in a similar fashion to previous events, except in this one the player aimed for Mystic Lanterns.

In addition to the Turtle Dragons, Nests of Deer Dragon Eggs could be bought in the Camp's Shop for Dragon Gems, though the time they could be purchased wasn't limited to the event time, and were available through all the time Version 3.17.0 was available and afterward.

The year of The Rat Event (Second Occurrence)[edit | edit source]

The year of The Rat Event is the Second Occurrence of the Chinese New Year Event and it took place from 24th to 27th of January 2020.

The event offered 10 prizes, one for each tier of points accumulated. Every time sufficient points were achieved, the counter was reset for the next goal. The points could be obtained by tapping Mystic Lanterns which in turn could be achieved by either harvesting/tapping Spiritual Trees; healing the dead land; harvesting Lucky Statues, or opening Special Chests and Secret Chinese Capsules.

Some players have found that they had to gather more lanterns for this event. It is currently unknown if this is a bug or based on something else.

Three types of event treasure capsules were offered during the Chinese New Year Event. Though given level values they do not merge. A Bronze Treasure Capsule could be obtained for free once every 3 hours. The shop could be accessed from the bottom right of the screen in the level.

Note: Only the italicized items were listed as possible rewards in the Secret Chinese New Year Capsules shop.

A special shop was available during the event, and all items could be bought with gems. The shop could be accessed from the bottom right of the screen, under the Secret Chinese New Years Capsules shop.

A one time offer was presented, which could be accessed from the top right of the screen all the time of the event. For $10 (in the U.S., the price varied depending on the country of the user), you could get 1100 Mystic Lanterns, 3100 Magic Currency and a level 3 Turtle Dragon. 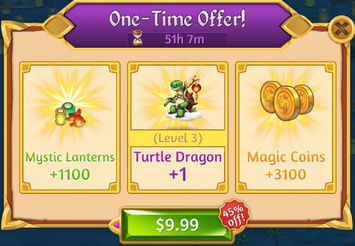 A one time offer was presented, which could be accessed from the top right of the screen all the time of the event. For $10 (in the U.S., the price varied depending on the country of the user), you could get a Festive Carp Lamp x2, a Magic Gem of Tears, Magic Gem of Blood x2, and a level 3 Deer Dragon. 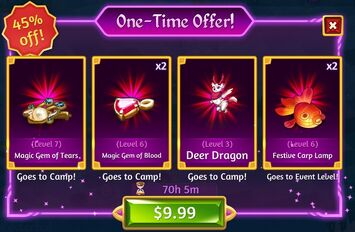 Similarly to previous events identical nerfs have been made in order to make the level harder:

At first create a Level 9 Life Orb (takes a little patience) it will open a lot of land, which means you can harvest brambles for life flower sprouts, so you can make larger life flowers and open more land faster.

Once you opened a lot of land, you can just keep tapping event houses until your open land is full and merge everything. So you have a lot of high level event items.

Good luck! And remember patience is everything