Daily Rewards are a new daily prize system that replaced the Daily Treasure Chest. It was first released as Beta in Version 6.4.0 (14th of June 2021). With Version 6.7.0 (18th of August 2021) everyone gained access to the feature.

Unlike the Daily Treasure Chest, the Daily Reward becomes available every day at midnight in player's local time. The quality and rarity of Daily Reward depend on the amount of consecutive days you've logged in. If you missed a day or few you can either spend 2 Dragon Gems to restore your streak or start from the Day 1 of your current week again.

There are currently 6 cycles of Rewards, 28 days each. At the beginning you get common low-level loot, which gets better with each week's progression. Every 7th day you receive a slightly rarer Reward - usually from the Chrono Dragons or Super Eggs Merge Chains.

* Note: So far the players have reported getting cycles #2 or #3 only once (when the feature just got out of beta), and endlessly switching between #4 and #5 after that. Cycles #1 or #6 haven't been reported at all. It's very likely that cycles #1-3 & #6 were removed permanently. 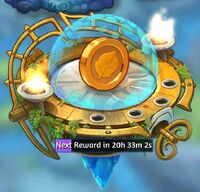 Daily Reward island in the beginning 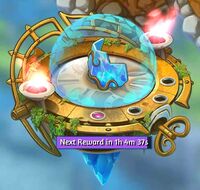 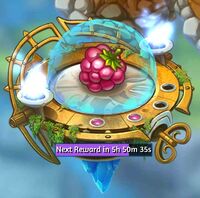 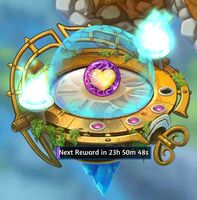 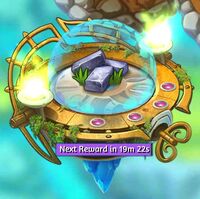