Daily Treasure Chests are non-mergeable chests that were introduced on version 2.0.0. It lies on a dedicated 2x2 island floating at the bottom-right of the camp. After tapping the chest, it will spawn on the nearest available tile on the camp. Afterward, a 23 hours timer starts for spawning the next daily chest.

Every time a player achieves 7 daily chests (the 7th, the 14th, the 21st etc), the last one will have a purple hue and be larger than the regular ones. 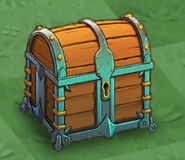 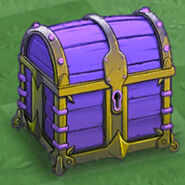 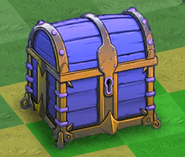 The loot of the daily chests improves as more daily chests are opened, resetting after 49 daily chests. The "chain" won't reset if a player waits more than a day to open a chest, and the "loot" of the chest will be determined by how many chests the player has opened beforehand and not by the number of days passed.

The chest number can be checked before taking it from its island, as the text would say "Collect (#X)" while the X is the number of the chest.

After collecting the 49th chest, the counter will entitle the next treasure chest as the 50th chest, however, the rewards are reset, meaning for the 50th chest you'd get the 1st reward, for the 51st one the 2nd reward and so on. Generally speaking, take the number of the daily chest you currently have and decrease 49 from it until it is between 1 to 49, that would be its reward. ( 0<X-49K<50, X and K are natural numbers, where X is the number of your chest and K is the amount of times you decrease 49).

Retrieved from "https://mergedragons.fandom.com/wiki/Daily_Treasure_Chest?oldid=27663"
Community content is available under CC-BY-SA unless otherwise noted.