Edit
watch 04:03
Wiki Targeted (Games)
Do you like this video?
Play Sound

Note: Since Den Events are a new feature, the information might be subject to change.

The Divine Wishing Well is an immovable object, located on a 3x3 island which can be found in the middle of Den Event map.

Throwing a level 5 Aureus Coin into the Well will grant you a Boon. The Boon's purpose is to boost the amount of Points earned from merging different items for a limited time.

The Boons last for 5, 10, 15, 20, 25 or 30 minutes. During that time, depending on the Boon, merges or 5-merges of specific Merge Chains or objects will give you increased Event Points. You have two options:

To gain a new Boon you can either wait until it runs out and throw another Aureus Coin, or spend 19 Dragon Gems to change it immediately.

While the Boon is active, depending on its description, different objects can be seen floating across Event's level. If the Boon asks to merge Water you'll see Clouds, if it says to merge any Trees - Dragon Tree Leaves, Fruit Tree Leaves and Autumn Leaves etc.

Starting from the third Fluff Mountain Event you also get suggestions from Kala's Mini Shop related to each specific Boon.

Another change introduced during third Den Event was the Boon icon which can be found in the upper left of the screen near Event Rewards bar. It serves as a reminder of the Boon's requirements. After the Boon has expired it also reminds you to throw another Aureus Coin into the Well.

Asking for an Aureus

The following Boons are available during Event:

Newly introduced in the third Fluff Mountain Event, Kala's Mini Shop can be found on a 4x4 island to the right of the Divine Wishing Well. For the duration of the Boon it offers relevant items from Event Shop for Dragon Gems.

Since compared to other out-of-Camp Events the Den Event Shop was drastically expanded to include Totems for most standard Merge Chains among other things, rather than offering items cheaper Kala's Mini Shop serves as more of a reminder and an easy way to navigate it.

Mini Shop's island looks the same as the one that holds the Daily Treasure Chest, which can be seen while the Shop is inactive. 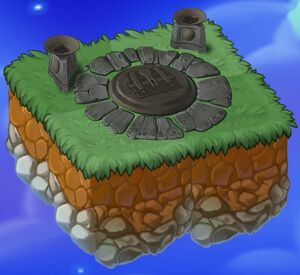 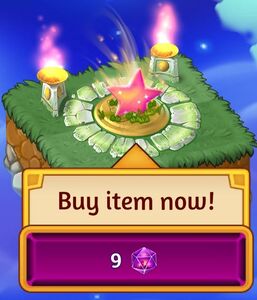 Wishing Well with an active Boon 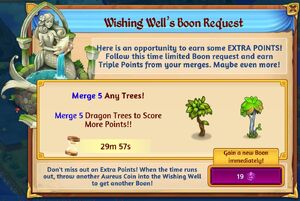 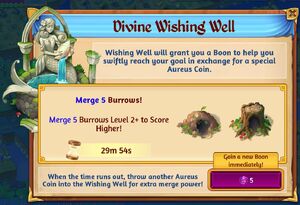