Dragon Chests can be harvested or spawned from many objects present in the Dragon world. They can also be found under Evil Fog or offered as a reward for certain Levels. In Camp, they are locked and need to be opened with Dragon Gems.

Depending on the object they were harvested from, their appearance and contents change. They follow the following Merge Chain:

Super Nest Vault and Mega Nest Vault can also be obtained but cannot be merged.

The rarity of Chests also varies based on the contents, with Chests containing rarer Dragon Eggs and items being more expensive to open.

The current understanding is that the contents, price, and rarity of merged Chests depend on the Chest that you dragged and dropped when merging. The obvious exploit is that you can use easier-to-obtain Chests as fodder and only one Chest of the desired type when attempting to merge, thus maximizing the outcome.

Chests can have one of five visuals. Only Chests with the same level and appearance can be merged, but their contents can vary.

* Colored Chests are being tested in Beta (retired?) and are available only to a selected number of players.

Chests contents are determined by where they were harvested from.

Topsoil appears to provide a wide variety of Chest types.

*WARNING - MATH* If this isn't your thing skip to the end (Conclusion) to see the most efficient/recommended way to open Chests. For those of you interested in the stats... *dead silence* ... Read on!

Dragon Eggs are the main reason for opening Chests, and merged Chests contain a higher no. of Eggs.

Chests are further split into 7 price bands based on their rarity and contents (which helps identify them).

* 7th price band is for Colored Chests, which are only available in Beta (retired?).

The graph below shows the cost per Egg of Chests in different price tiers. As you can see, larger Chests tend to cost more on average. Although larger Chests can be as cheap as smaller ones, this is unlikely and crucially, they have a much greater range in price, meaning they could be much, much more expensive.

This graph replaces previous ones that concluded that merging Chests was inefficient. Although merging does not cost anything in itself, there is an effective cost caused by the consumption of Chests (you end up with fewer Chests after merging) and the cost difference between larger and smaller Chests (shown above).

According to the analysis, Egg Chests (Dragon Egg and Radiant Egg) provide the best value for money. Radiant Egg Chests have a stable Eggs-per-Gems ratio, but the normal Egg Chests will average to the same over time. Furthermore, many Dragon types are available for Coins in the Egg Shop, or via other means (non-Coin non-Gem purchases, Level repeat rewards). Both Moon Dragon and Ice Dragon Eggs are found in Chests, but buying them from the Egg Shop may be more effective at times.

Thus, it is recommended to sell all non-Mystery Nest Vaults, never merge Vaults or Chests, and only keep and open the following Dragon Egg/Radiant Egg Chests:

As well as Chests containing Mystery Eggs (Ruby or Sapphire variety - not Tanzanite) obtained from Dragon Trees or, alternatively, in Super or Mega Nest Vaults. It is also advised to sell Nest Vaults rather than opening them due to how cost-inefficient they are.

These following Chest types/cost types will only contain Eggs/Nests that cannot be bought for Coins, and are therefore cost-safe to keep and open even when their source is not known:

Note: If your goal is to obtain mid-high level items rather than Eggs then I suggest picking your source and merging Chests from it into the highest possible level and then opening that.

To help you identify these Chests

*Disclaimer* This is according to the information on the rest of this page, which is incomplete.

However for the other Chest types you will need to manually watch what source they come from and separate them. Where possible, open only Egg Chests, preferably Dragon Egg Chests. Doing this will maximize the value you receive for spending Gems to open Chest. 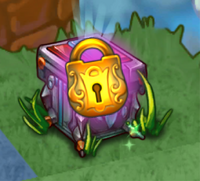 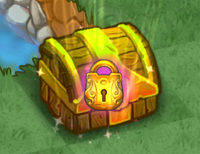 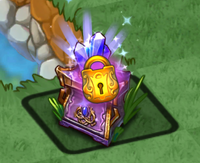