Dragon Homes are buildings that allow your Dragons to rest and regenerate their Stamina.

When bought from the Build Menu, it appears as a Build Site. An arbitrary number of Dragons may automatically start to build it. You may also double-tap or drag any Dragon onto it to start building.

If a Dragon Home has a bar above it with a double arrow, and an animated sleeping sprite "zzz", at least one Dragon is sleeping inside. If there are more than 1 Dragon, there will be a number. If a Dragon Home has smoke coming out from it, there are Dragons inside that are awake. Otherwise, it is unoccupied. 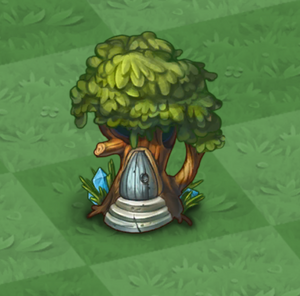 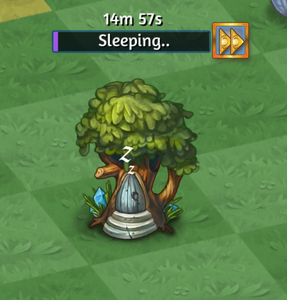 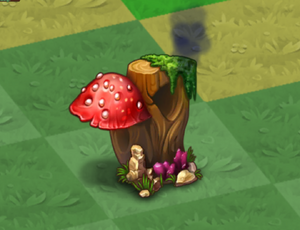 Dragon Home with awake Dragons inside and no sleeping Dragons 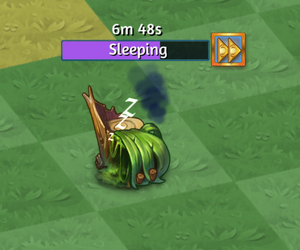 When you enter the Camp all Dragons that have woken up while you were away from it will emerge from the Dragon Homes one by one, landing on some free tiles. Since only 15 Dragons may be active in Camp at any time, the excess Dragons will go back inside a random Dragon Home and wait until some other Dragons have gone asleep.

Tapping a Dragon Home which has smoke coming out from it will eject a Dragon.

When a Dragon has its Stamina used up it will go back into a random Dragon Home, from which a random Dragon will emerge in replacement, if there are any awake Dragons in it and if the number of roaming Dragons is not over the cap.

When a Dragon awakens and emerges from a Home, the sleep timer resets, and no more Dragons can emerge until the full rest time has elapsed. So if you merge all your Homes into one, only one Dragon will be resting at any given time. Having many different Dragon Homes gives you maximum active Dragon time.

You can wake up your best Dragon (the one with the most Stamina) by watching an advertisment. All Dragons sleeping inside a certain Dragon Home can also be woken up immediately for Dragon Gems (the amount is proportionate to the quantity and level of Dragons). 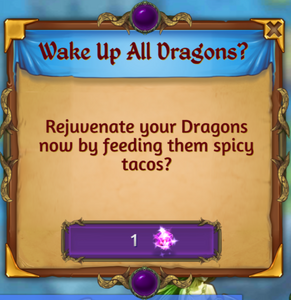 Wake Up All Dragons

The sleeping process could be sped up by Alarm Clocks, which appeared only in Version 1.10.0 to selected players for testing. This Beta is currently retired.

When Dragon Homes are merged or sold all Dragons inside of them will be ejected, and a message saying "Dragon moving day!" will appear. The Dragons will then spread out to the nearest Dragon Homes.