Dragon Shrine is a feature in Merge Dragons!, first released as Beta with Version 8.5.0 (13th of May 2022). It's a revamp of the discontinued Royal Egg Bank feature.

You can open the Dragon Shrine by tapping the

icon on the top center left of the screen.

The player can earn various rewards for their Camp by collecting Wishes and opening Dragon Shrine Chests, including: 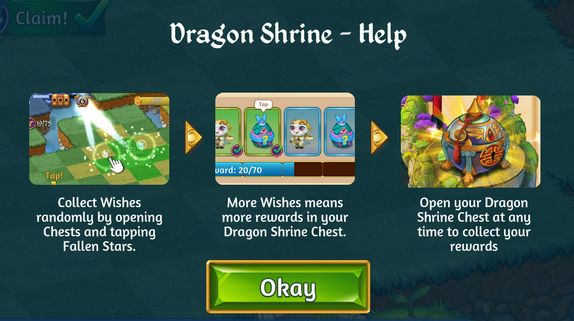 Upon entering the Dragon Shrine after tapping the

To receive the Dragon Shrine Chest with all rewards you've earned you must spend 200 Gems.

), but once you have earned all the rewards it starts a 24 hour timer (example: Shrine's icon with a timer

) within which you must purchase the Chest or loose your progress/Wishes you have collected.

Every time you buy the Chest you get the chance to upgrade your Dragon Shrine to the next level and get better Chests/rewards. There are currently a total of 6 levels of the Dragon Shrine.

Upgrading the Shrine doesn't increase the price of the Chest or the amount of Wishes required.

Wishes (points) can be collected by tapping on the three types of Wish Sparks that give either 2, 4 or 10 Wishes. These Wish Sparks can be obtained by variety of ways:

Tap Wish Sparks instead of letting the game auto-collect them[]

Wish Sparks which are auto-collected by the game only award half to amount of Wishes that they are worth. Hence it is better to tap the Wish Sparks yourself as illustrated in the picture below.

The Shrine can be upgraded to get better rewards in the Dragon Shrine Chest.

There are 4 types of Decision Eggs that can be collected as rewards from the Shrine. When you tap each of them you're presented with 3 options of Dragon Eggs/Nests to choose from.

*Only level 1-2 Decision Eggs give Tier 2 Eggs if you have them in Camp.

** There seems to be a bug with the level 4 Decision Egg's first option. Once selected, the [Okay] to confirm your choice doesn't show. 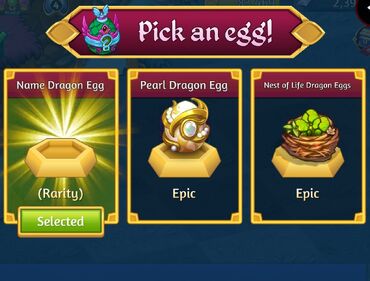 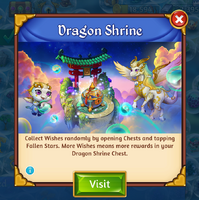 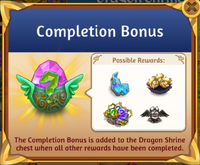