Similar to Levels and Camp, Events have Quests that are rewarded with Event Quest Stars. Each Event has 10 Quests, most of which are the same in all Events.

The current rewards for completion of all 10 Event Quests include an Ancient Spring, a Nest of Owlet Griffon Eggs and a level 3 Midas Tree.

There are 3 Quest lines. Quest 1 will show as the top star, Quest 2 as the middle star, and Quest 3 as the bottom star. Each Quest progresses independently. For instance, if you finish a step in Quest 1, it will progress to the the next step under Quest 1. When the last step in a Quest line is complete, that star may remain yellow or disappear from the screen. 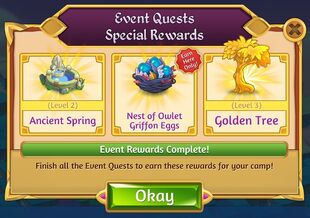 Event Quests Special Rewards now
Add a photo to this gallery
Retrieved from "https://mergedragons.fandom.com/wiki/Event_Quests?oldid=32080"
Community content is available under CC-BY-SA unless otherwise noted.