Edit
watch 04:03
Wiki Targeted (Games)
Do you like this video?
Play Sound

Playing levels is an essential part of Merge Dragons.

Starting from Grassy 1, each level has a number of possible free rewards which are shown when you click on the level you want to play.

Completing a level lets you choose a random number of rewards. Some are free, some cost a certain amount of gems.

Which free rewards you get is shown in each level overview. On top of that there's a random chance for Ancient Riches, Draken Grails and other things you leave on the level, like the Dragon Star ( But they need to be Landed and not in a Loot Orb )

Most rewards for gems are not worth getting, but it is the only way other than completing all 10 Event Quests in an event to get the Fountain of Legend without paying real money. Nests are usually also cheaper than when bought from the buy menu (but more expensive than when obtained from Dimensional Jars).

As reward for playing the level a certain number of times, you can get Moon Chests, Golden Chests, Occult Chests, Dangerous Chests or Cosmos Dragon Eggs/Nests.

The amount of level completions required for each set of three is increased by 3 each time the set is restarted.

The order is as follows:

How Many Times Did I Finish That Level?[]

Depending on the reward that is currently your goal, there are 3 formulas to figure out how many times you have beaten a level. They are as follows: 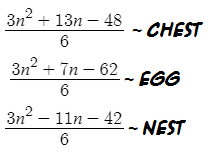 where 'n' is the amount currently required for completing the Chest/Egg/Nest reward, while each reward has its own formula.

The result will give the times you played including all the times needed for the current reward.

So, for example, if you got 3/15 for Cosmos Dragon Egg Nest, n=15, and using the third (last) formula for nests, you get 78. That is the amount of times you will have played this level if you do the remaining 12 level completions required for getting the nest; so, subtract that number from 78 and you will get the actual number of times the level has been completed --> 66.

Another Example: If you got 6/8 for Cosmos Dragon Egg, n=8, and use the second (middle) formula for eggs, you get 31. That is the amount of times you will have played this level if you do the remaining 2 times needed to get the egg, so, subtract that number from 31 and you will get the actually number of times this level has been completed --> 29.

Monkeyisagirldangit made easy to use spreadsheet that use the formulas above.

For support please write a message on her wall.