For the duration of the event, a new level was available. It could be accessed either from the camp or from the levels map. The goal of said level was to make enough event points to afford the 10 prizes offered (which, once achieved, were sent to the camp just like any level completion award). The level could not be reset, although it required no chalices to begin or resume.

The event was a bit easier for Android players, requiring 6,910 less points in order to complete the final goal.

A second occurrence of the event was from 25th to 28th of May 2018. While it used the same objects as the original event, some of the rewards were changed and the game's level is different.

In addition to the Moon Dragons, Nests of Martian Dragon Eggs could be bought in the Camp's Shop for Dragon Gems, though the time they could be purchased wasn't limited to the event time, and were available through all the time Version 2.9.0 was available (and afterwards).

A fourth occurrence of the event was from 27th to 30th of December 2018 with a different name. See the name above.

Fifth Occurrence - Fly Me To The Moon Event[edit | edit source]

A fifth occurrence of the event was from 29th of March to 1st of April 2019 with a different name. See the name above.

A sixth occurrence of the event was from 19th to 21st of January 2020 with a different name. See the name above

The event offered 10 prizes, one for each tier of points accumulated. Every time sufficient points were achieved, the counter was reset for the next goal. The points could be achieved by tapping Moon Fruits which could be achieved either by harvesting/tapping Moon Trees, healing the dead land, harvesting meteorites or opening Space Chests and Secret Space Capsules.

The prizes were as follows:

The 29,950 point total was roughly equivalent to one level 9 and two level 8 Moon Fruits.(iOS)

The 23,040 point total was roughly equivalent to one level 9 and one level 8 Moon Fruits.(Android)

The 29,950 point total was roughly equivalent to one level 9 and two level 8 Moon Fruits.

The 29,950 point total was roughly equivalent to one level 9 and two level 8 Moon Fruits.

Fifth Occurrence - Fly Me To The Moon Event[edit | edit source]

The 29,950 point total was roughly equivalent to one level 9 and two level 8 Moon Fruits.(iOS)

The 23,040 point total was roughly equivalent to one level 9 and one level 8 Moon Fruits.(Android)

Three types of event treasure capsules were offered during the event. Though given level values and a match chain screen, they did not actually merge. A bronze capsule could be bought for free once every 3 hours. The shop could be accessed from the bottom right of the screen in the level. One silver and one gold were presented on the level's map.

At the second Occurrence they were named Secret Magic Moon Capsules. There were no gold capsules at the level's map itself but just 2 silver capsules like the recent(relatively) events.

Note: Only the italicized items were listed as possible rewards in the Secret Space Capsules shop.

A special shop was available during the event, and all items could be bought with gems. The shop could be accessed from the bottom right of the screen, under the Secret Space Capsules shop.

One time offer was presented, which could be accessed from the top right of the screen all the time of the event. For 10$ (in the U.S., the price varied depending on the country of the user), you could get 60 Dragon Gems, 3000 points and 1,100 Magic Currency.

Though most items behaved the same, some nerfs were added especially for this level in order to make it harder:

From then, farm the life flowers, and merge objects on dead land when possible. Always merge 5 if possible, look at the dead land ahead (even sometimes very far ahead), to see if there are more of the object you're about to merge, and even if you do have 5, you may want to keep them to heal that land, as the healing needed for each tile rises from 50 to 500 to 5000 the deeper the tile is within the level.

Once the lvl 3 Prism Flower is unlocked, farm it for Dragon Tree Leaves until you create a lvl 4 Dragon Tree, which you then farm for Elderwood. Merge the Elderwood for creating the Tiny Cabin for Hedge Gnomes. Tap the cabin and make space around it so it will be able to spawn more lvl 1 Bushes. Keep harvesting wood and make cabins and bushes until you have got the tenth wonder - Ruins of the Sky Palace. One is enough, but you can create two (Android: 2 are reccomended due to lesser drops), however that might be very time consuming. Along the way, tap the bushes for the Magic Mushrooms, you will need those for later dead land merging/healing.

Once the wonder has been created, tap it and make as much dragons as possible with the Tanzanite Eggs, mind to keep 1 or 2 tanzanite mystery eggs as you might need it/them for future dead land merging/healing.

After that, you should have 2 lvl 3 Fruit Trees which will generate Life Flower Sprouts and about 5-7 dragons. Merge Life Flowers, always 5 if possible until you reach lvl 5 life flowers (Twin Life Flowers), don't merge those any further, even if you have got more than 5. Double tap those non-stop until all the healed land is full with Tiny Life Orbs. Afterwards, merge them, all at once. Rinse and repeat. Start healing, first the bottom area where tiles' amount of Death (HP needed to heal that tile) goes from 50 to 500 at the tip. Then continue north to the 500 tiles there. By the time you get the water, you can make some space around it so it will spawn Grass. Let it die so it will become Necromancer Grass, which will help in later dead land merging/healing or making higher level Prism Flowers. Continue until all land is healed. To heal all land approximately 4-5 lvl 9 Life Orbs are required in total, of course you will only make about 2 as the rest will be activated before as lower levels. If you do have the patience to not temp and click the lower levels of life orbs and wait for lvl 9 it will have the best outcome.

Drag all of the Moon Trees to the edge of the land, in a way in which they don't merge with each other, (of course), and harvest them non-stop until the land is full with Moon Fruits, merge them all, rinse and repeat, until you have enough points for all your goal rewards. Enjoy.

Feel free to write one :) 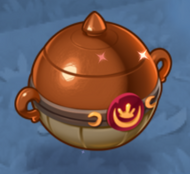 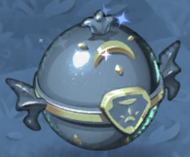 Gold Capsule in game
Add a photo to this gallery
Retrieved from "https://mergedragons.fandom.com/wiki/Magic_Moon_Event?oldid=32570"
Community content is available under CC-BY-SA unless otherwise noted.