Merging is the most basic and crucial action done in Merge Dragons!. The game is built in a grid shape and in order to perform a merge, a minimum of 3 identical objects are needed to be placed adjacent to each other.

Some objects, such as brambles, cannot be merged. This is shown by a black or brown outline.

Mind that not every 3 or more adjacent objects will automatically make a merge, only if you actively dragged one object to an additional 2 or more, the merge will occur.

Since 2.0.0, merging certain objects in camp or events have a chance to create Dimensional Jars which are available for limited time and can be opened with Dragon Gems. The jar will offer an additional object of the same level as the one which have resulted from the merging itself. If you don't want to spend the gems to open them, any dimensional jars created in camp can be sold for 50 coins. Dimensional jars created in events cannot be sold.

Sometimes, when you shift objects around too fast, unexpected things happen: accidental merges or not merging the correct number of objects.

This feature was introduced in Version 2.2.0. On the Game Settings Box accessible from the World Map, a player is able the change the Merge Preferences. Note that this only applies to merging in Camp! 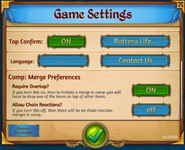 If this option is turned on, it would be possible to place more than 2 identical objects adjacent to each other without merging. In order to perform a merge in this situation, one of the item must be dragged and dropped on one of the other adjacent items.

Do note that even if this option turned on, If you merge too fast, sometimes the system can accidentally catch only 3 items and not 5. Therefore, when dragging an object to perform a merge of 5, please check that 4 other identical objects are highlighted and moving towards your object.

If this option is turned off, no chain reaction would occur in camp. This means combo merging won't be possible and accidental merges are nearly impossible(when combined with 'Require Overlap' turned on').

Outcomes of a merge[]

Note that in this section, a merge is assumed to be made of 3 objects.

Merging will typically yield 1 object of the next level. However, there are many merges that create more than just 1 object.

In some cases, additional objects that are not related to the main merge chain will be created.

Some merges will not grant a next level object but rewards or miscellaneous objects.

Merging can also assist in healing Dead Land. If one or two objects of the same kind are adjacent to each other and on dead land near healed land, the player may merge them out of the Dead Land and also heal it as a bonus. The healing power required to heal it is ignored.

It is the only way to heal Super Dead Land, other than using Heal Extenders that are adjacent to those. Many of the later Levels has heavy use of the concept of Dead Land Merging.This is also relevant in Event Maps where there are many Dead Land that requires 5,000 Healing Power to heal, and the player may find it easier to heal those through merging.

The most minimal merge requires 3 identical objects to be actively placed adjacent to each other in one movement. The reward for merging 3 objects is 1 object of the next level.

While the fact that when this happens it is always an accident, it is also possible to merge objects by pushing one into a group of identical objects using a miscellaneous item. Since Version 2.2.0, if the option 'Require Overlap' in the Game Settings is toggled on, such accidents can't happen.

There is a pattern linking merging X number of identical objects and the Y number of objects of the next tier created, but generally, the way to go is to always merge in multiples of 5.

The algorithm goes as follows:

First, the system calculate the number of objects merged=(X).

Chances speaking when merging large amount of objects, there is 20% chance of getting an ejected X as the modulo must be 2.

When an object is ejected in a merge of 4 or various other numbers, it is a new object of the type. This means that it counts toward completing certain goals. When merging idols by 4 you can tap the ejected one for another egg, etc.

It is possible to do combo merges by placing groups of consecutive levels of objects in the same merge chain in a certain pattern.

Combo merges create Loot Orbs containing healing power, which is proportionate to the combo number. One Loot Orb is created per combo, so a combo of 3 will create 2 Loot Orbs. If all the land at the Level/Camp is healed, it will be automatically added as points to the Score.

If on Settings, 'Allow Chain Reactions' is turned off, no combo merge would be possible in the camp.

As can be seen above (Setup for a combo of 8 (3-merges)), the player needs to be quick to sustain the combos. Just after the first object was placed, the 5th level must be dragged quickly as possible to the place where the 2 level 1 ones were, and do the same for 6, 7 and 8.

To make a combo of 8 a bit easier, move the farthest item from the center tile horizontally and then one vertically. (eg. Let's take the above image: As soon as the level 1 items merged to the center, take the uppermost level 5 item and move it diagonally, right+down, not even touching the centermost level 5 item) This way only one item of the following tier of items to be merged need to be moved vs moving the 2 items and taking the chance of missing your chance at the combo.

As mentioned before, merging 5 objects is more beneficial than merging 3, but it really matters the higher level of the object you want to achieve or that if you seek to only have the final level of the merge chain.

Here is the most efficient way(the minimal method) to get a single level 13 life tree, by always merging in 5s, but at times 3s.

Here's the most inefficient way(the wastage method) to create a single level 13 life tree, which means always merging 3 objects together:

However, 5-merging everything in the camp may be space-consuming. The moderate method is to merge 13 at a time, which forms 5 objects of next level. The waste is only 4% and not too much things will accumulate in the camp.

In fact, since the numbers increase exponentially the higher up the merge chain you want to go, the wastage percent increases quickly as well. The amount of Life Flower Sprouts you'd use in the inefficient method for a level 13 Life Tree-531,441 could be used in the efficient method for a level 15 Life Tree-478,050 and even have leftovers. Refer to the Wastage Graphs here. ---> Merge Chain Tables

The total number of eggs you have to buy to complete the Merge Chain of that particular Dragon can vary a lot, due to the Nests giving a random number of eggs (between 4 to 7 for Tier 2 Nests), and also if you are willing to spend Gems to duplicate Tier 2 Nests that appear randomly in Dimensional Jars.

There are three ways of merging where you might utilize while playing.

For 1, you would be performing 5-merges whenever you can, but sometimes you will be performing 3-merges because you would require more base units if you merge more than that. Refer to table for merging Minimally for 1 Object.

For 2, it is the same as 1, except that you require more base units. Refer to table for merging Minimally for 2 Objects.

For 3, you will perform 5-merges only. Note that this method is the most space consuming method. Refer to table for 5-Merges-only all the way.

Monkeyisagirldangit made easy to use spreadsheet that use the info from the tables below, unfortunately that particular link no longer works. There is another spreadsheet available to download or copy into your own Google Drive, but cannot be used directly at the source (could someone confirm whether or not this spreadsheet is the same as the one mentioned before?). 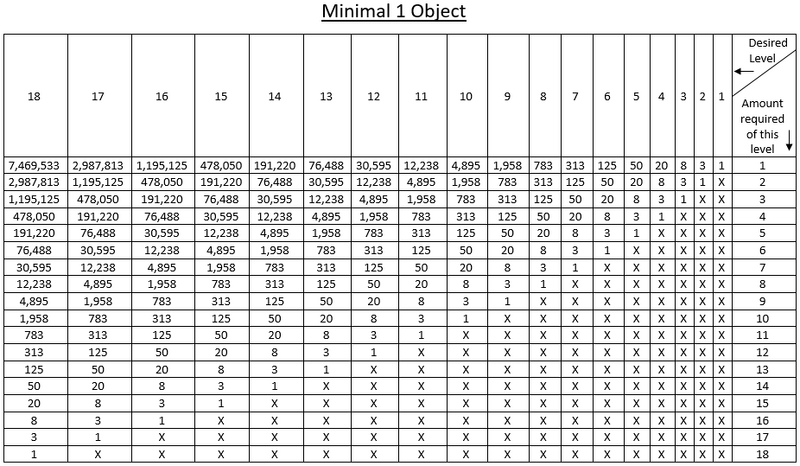 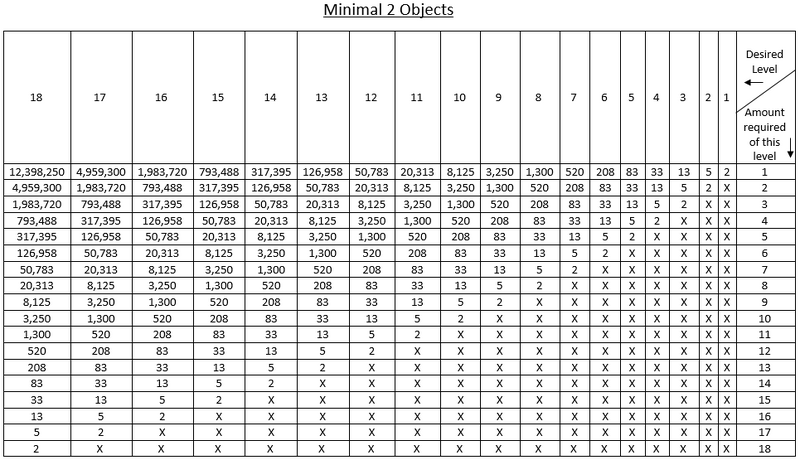 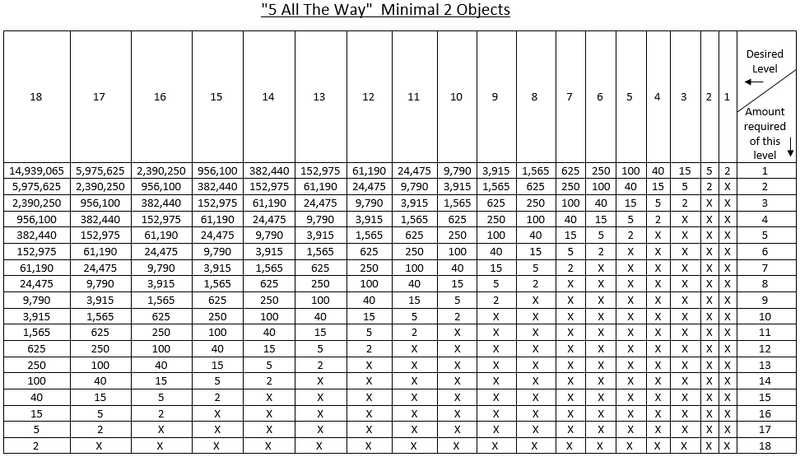 The "Merge Worth Results" column is calculated as the average worth of each coin of that level if one were to merge all of them under the 5ATW merging rule, and tally up the total worth of the higher level coins.

Merging coins into higher tiers proves to be very efficient in the long term. If we go by 5ATW merging, and considering the number of lower level magic coin equivalent of two Tiaras (Worth 50K in total):

The same logic applies to Stone Bricks. If we go by 5ATW merging, and considering the number of lower level Stone Bricks equivalent of two Ogre Stone Monolith (Worth 50K in total):

Merging Life Orbs also proves to be efficient, just like Magic Currency and Stone Bricks. If we go by 5ATW merging, and considering the number of lower level Life Orbs equivalent of two The Life Orb of Heavens (Worth 655360 HP in total):