Moon Dragons are an Event Dragon breed, Trophy type. They could be obtained during the Magic Moon Event. Three Eggs could be achieved from the Event's goals and a Nest, which could give 3 to 7 Eggs, like all normal Nests. A level 4 Noble Moon Dragon was the reward of the final goal of the Event.

After Update 1.11.0, Moon Dragon Eggs are available for 10 Dragon Gems in the Egg Shop, and the price increases by 1 per Egg bought to a cap of 30 Dragon Gems.

When Noble Moon Dragons are merged, an additional Eclipse Dragon Egg Nest may be created in a Dimensional Jar with a cost of 525 Dragon Gems.

After Update 2.4.0 3 Moon Dragon Eggs are available under the fog of the eastern premium patch, effectively making this Dragon a non-event limited Dragon for paying players.

The first image to show any level of Moon Dragon

Moon Dragons featured during the event 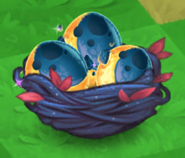