Turtle Dragons are an Event Dragon breed, Trophy type. They were originally obtainable during the Chinese New Year Event. Three Eggs and a Nest were awarded as Event goal rewards. A level 4 Wise Turtle Dragon was the reward of the final goal of the Event.

They could also be bought in the Egg Shop after Update 3.17.0 for 10 Dragon Gems, which will increase by 1 per Egg until it reaches the max of 30 Dragon Gems.

When Wise Turtle Dragons are merged, an additional Terrapin Dragon Egg Nest may be created in a Dimensional Jar with a cost of 475 Dragon Gems. 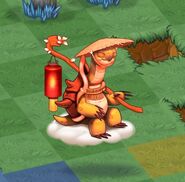 Magnificent Terrapin Dragon
Add a photo to this gallery
Retrieved from "https://mergedragons.fandom.com/wiki/Turtle_Dragons?oldid=32936"
Community content is available under CC-BY-SA unless otherwise noted.