Wild Lands Event is an out-of-Camp Event that was added to the game in June 2022. The first occurrence was a Beta trial for a limited amount of players, but from the second occurrence on everybody could experience the Wild Lands.

The main attraction of the Event is two unique Dragon breeds: the Gluttonous Dragons that can be obtained for free, and the premium Mycelial Dragons that can only be purchased with Dragon Gems or cash.

For the duration of the Event, a new level becomes available, and can be accessed through the Event Icon either from the Camp or from the Levels Map. The level can not be reset, although it requires no Chalices to begin or resume. The main goal is to create and tame wild Dragons in order to receive them as Event Rewards in your Camp when the Event is concluded.

Wild Lands Event requires an active internet connection and at least 450 Dragon Power. Connectivity issues during the Event will result in prohibiting the ability to participate and freezing the progress in the level until connection is re-established.

Unlike other Events, the Dragons created in the Wild Lands Event are considered "wild", and in order to use them the players need to "tame" them first by feeding them Wildberries.

Another change is that the Dragons have the same Stamina limitations they have in your Camp. Harvesting the Berries spends their Stamina, and when the Dragon is tired it must go and rest in the Event-specific Exotic Dragon Homes for a short period of time, even if it's still untamed.

Considering the restricted Dragon activity in the Event, most time is spend tapping the self-charging items called the Conjurers and fulfilling the Quests to earn Wildberries.

Three new Merge Chains of so-called Conjurers were introduced in the Wild Lands Event: the Ruined Fountains, the Mystic Trees and the Lightcrystal Veins.

Conjurers of level 3 and above will glow when they are charged and ready to be tapped. Tapping them will make them shrink, until they stop glowing, but they will never disappear and will grow and recharge again in a matter of seconds.

Each Conjurer Chain produces two types of objects: one is more common, while the other can be obtained only once in a while. These conjured objects are used to complete the Event Quests.

The Wild Lands Event offers a never-ending chain of Event Quests, which can be seen in the middle left part of your game screen, three at a time.

The Quests will require you to create and permanently surrender to the game a certain amount of the conjured objects. The Quest may ask you for up to three different items, either from the same Merge Chain, or from the both Chains produced by the same Conjurer. The requirements are usually scaled to your Event progress.

The Quest icon will show you how many of the needed items you have. As an additional hint, when you create the required object, it will also have a small green checkmark on its sprite.

Tapping the Quest icon will automatically give it all available items it's asking for. If you wish to fulfill your Quest only partially (and, for example, save other items for merging), you can tap a small "i" on the Quest window to see the detailed information and larger pictures accompanied by the item's name, and hand the specific objects from there.

Additionally, if you're stuck and not sure what item the Quest is asking for, tapping the item's picture will bring up its Merge Chain screen and show its level.

When the Quest is complete you can tap its icon again to receive the Wildberry Chest. 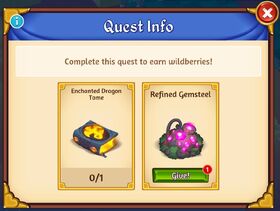 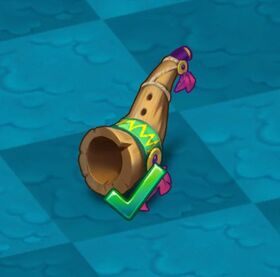 Item Required by the Quest 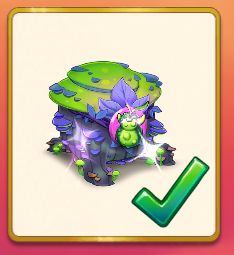 Each Quest has a Red, Green or Blue Wildberry Chest randomly assigned as its reward. Inside you're guaranteed to find at least one Wildberry of the Chest's color, and rarely you can get a bonus Berry of different color.

The Wildberry Chests received from the Quests asking for high level items may have two Berries of the Chest's color inside of them.

The Wild Lands Event introduced a new mechanic of splitting objects. If the Quest is asking for the items you've just merged, for a constant fee of 50 Dragon Gems you can split the result of the merge back into its lower level components.

The icon for splitting is located on the item's Information Bar before the "delete" button.

The Wild Lands game field consists entirely of the Super Dead Land covered by the fog, which is unlocked one section at a time by taming available Dragons. The required amount can be seen under the lock icon in the specific fog region.

Since there're no Life Flowers and no other means to obtain the Life Orbs, all land is healed by merging.

Most items on the Dead Land come from the conjured Merge Chains (the same objects, that are used for Quests). Rarely, you can find level 1-2 Conjurers. Almost each new fog section will also hold a certain amount of Dragon Eggs, usually two per breed.

Additional Eggs and Conjurers necessary to complete the merge on the Dead Land come in the Ancient Chests.

Since the Egg distribution per map section/Ancient Chest is tailored almost to exact number of Dragons needed to unlock the next fog area, it's unlikely you'll be able to save your Eggs to attempt a 5-merge later (you can see an example of how exactly the Eggs are spaced across map/Chests here).

Each time you unlock a new fog section you're rewarded with an Ancient Chest. Sometimes, as a bonus you also get a level 1 Tiny Golden Wildberry.

Inside the Ancient Chest you will find 1-3 Dragon Eggs and 1-2 Conjurers (mostly level 1, very rarely - level 2).

The Chest for the last area holds a Glowing Dragon Statue instead of Eggs (merging of the Statues results in the level 4 Glorious Gluttonous Dragon). 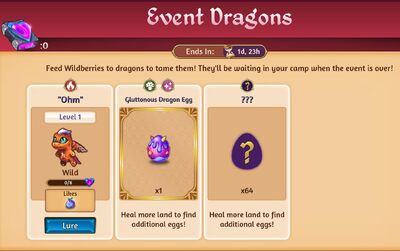 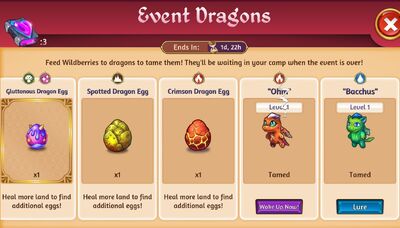 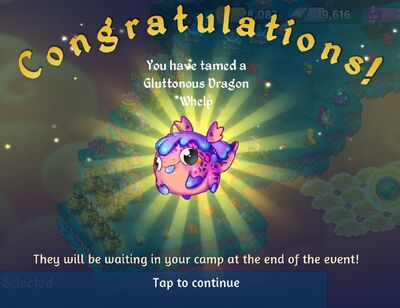 The first occurrence was a limited Beta test, which ran from the 14th to the 16th of June 2022 and was available for both iOS and Android. An update to the Version 8.6.0 and a minimum of 450 Dragon Power was required in order to participate in the Event.

This Event introduced two new Dragon breeds - the Gluttonous Dragons and the Mycelial Dragons, although the latter was only available either as a one-time cash purchase, or from opening a Premium Land plot for 750 Dragon Gems.

Additionally, the players could choose to open a Premium Land plot for 750 Dragon Gems. It contained some Berries, some Conjurers and 5 Mycelial Dragon Eggs.

For the duration of the Event various offers could be purchased with Dragon Gems or real money.

A special shop was available during the Event, and all items could be bought with Gems. The shop could be accessed from the bottom right of the screen.

Once Upon a Time Event

The second occurrence was the first Wild Lands Event that everyone could play. It ran from the 28th to the 30th of June 2022 and was available for both iOS and Android. An update to the Version 8.6.0 and a minimum of 450 Dragon Power was required in order to participate in the Event.

* There were a total of 16 Gluttonous Dragon Eggs to discover, but since game forced you to 3-merge most of the time, it's likely the players ended with 5 Whelps and 1 left-over Egg.

For the duration of the Event various offers could be purchased with Dragon Gems or real money.

Limited Deals offered for purchase with Dragon Gems 6 items at a time from the Dragon Essence, Gemsteel, Mystic Plants, Mystic Shrooms, Ancient Heirlooms and Ancient Ornaments Merge Chains. Deals refreshed once an hour, or could be refreshed immediately for 100 Dragon Gems.

A special shop was available during the Event, and all items could be bought with Gems. The shop could be accessed from the bottom right of the screen. 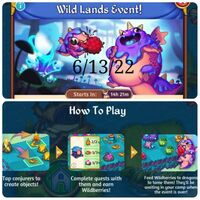 Every Dragon tamed will return to your Camp at the end

Wild Lands Whelp Dragons. What they do and need.

Working Berry Chest Quests with Merging Up Foods for Dragons
Community content is available under CC-BY-SA unless otherwise noted.
Advertisement