Zen Dragon Event was the sixth in-game event which lasted 5 days, from 19th to 24th of January 2018, for both iOS and Android. The main draw was the introduction of the Rising Sun Dragons.

For the duration of the event, a new level was available. It could be accessed either from the camp or from the level's map. The goal of said level was to make enough event points to afford the 10 prizes offered (which, once achieved, were sent to the camp just like any level completion award). The level could not be reset, although it required no chalices to begin or resume.

In order to participate, an internet connection must have been presented. Connectivity issue during the event would have resulted in prohibiting the ability to participate and freezing the progress in the level until connection was re-established.

The event ran in a similar fashion to previous events, except in this one the player aimed for Japanese Charms.

In addition to the Dragons of the Rising Sun, Nest of King of Hearts Eggs could be bought (for the second time, after the Valentine's Day Event first occurence) in the Camp's Shop for Dragon Gems, though the time they could be purchased wasn't limited to the event time, and were available through all the time Version 3.7.0 was available (and afterwards(?))

The prizes were as follows:

Zen Dragon Event Prizes
Add a photo to this gallery

Three types of event treasure capsules were offered during the Zen Dragon Event. Though given level values and a match chain screen, they did not actually merge. A Bronze Treasure Capsule could be bought for free once every 3 hours. The shop could be accessed from the bottom right of the screen in the level. Two silver capsules were presented on the level's map.

Note: Only the italicized items were listed as possible rewards in the Secret Zen Dragon Capsules shop.

A special shop was available during the event, and all items could be bought with gems. The shop could be accessed from the bottom right of the screen, under the Secret Zen Dragon/Japan Capsules shop.

Zen Event Shop Part 3
Add a photo to this gallery

A one time offer was presented, which could be accessed from the top right of the screen all the time of the event. For 10$ (in the U.S., the price varied depending on the country of the user), you could get 60 Dragon Gems, 3000 event points, and 1,100 Magic Currency. 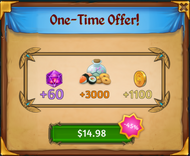 Similarly to previous events identical nerfs have been made in order to make the level harder:

This time around the way to gain more dragons is a tad different from the others events but other than that it's pretty much the same, it took me 6-6.5 hours to end this event, a pretty quick one, though I had a busy weekend so a bit late with this guide, sorry <3

Feel free to write one :)

Harvest these for some quick Japanese Charms!

Retrieved from "https://mergedragons.fandom.com/wiki/Zen_Dragon_Event?oldid=28584"
Community content is available under CC-BY-SA unless otherwise noted.